Dr. Nikos Tsioumas is an ophthalmologist and eye surgeon in private practice in Athens, specializing in glaucoma, cataract microsurgery and laser refractive surgery. Since 2004, he is dealing intensively with vitreoretinal surgery and medical retina diseases.

Dr. Tsioumas was born in Athens on 1970. He is son of Georgios Tsioumas M.D. (ophthalmologist) and Dimitra Tsioumas. He graduated from Marasleio school of Athens in 1988.

He was subscribed at the school of medicine of the University of Modena and Reggio Emilia in Nothern Italy after admission exams which he successfully passed. He took his university diploma on July 1995 with a grade 100 out of 110 . The subject of his research paper thesis was: "The ophthalmic filariasis". He was an internal student at the Internal Medicine Clinic of the same University from September 1991 till December 1993. On March 1994 he was accepted in the University Eye Clinic, as an internal student. He remained there till his residency.

On December 1995, he began his residency at the Eye Clinic of the Department of Neuropsicosensorial Pathology, of the University of Modena, Italy, after admission exams which he successfully passed (Head: Prof. Roberto Guerra). During his residency, he showed particular interest in glaucoma and electrophysiology. He remained, for the whole course responsible for the electrophysiology lab, under the guide of Dr. Giancarlo Delvecchio. He gained valuable experience in digital fluorangiography, laser treatment and ocular ecography. He also showed great interest in the surgical activity of the clinic. He became an observer ophthalmologist at the University Eye Clinic of Munich, Germany on May 1998 for two weeks.

From January 1999 to September 1999 he worked at the Department of Ophthalmology of ELPIS General Hospital of Athens, for his last 9 months of his residency. He returned in Modena where he passed his final exams with 50 out 50 plus with honours and the subject of his research paper thesis was: "Correlation of pattern electroretinogram and threshold automated perimetry in glaucoma patient".

From October 1999 to Dicember 1999, and at the end of his residency, attends two fellowships in the "Oftalmologia e futuro" Eye center of Modena. Refractive surgery with excimer laser and nerve fiber layer study with GDx in glaucoma.

Today Dr. Tsioumas is responsible for the Glaucoma department of the Athens Eye Hospital and a basic member of the vitreoretinal team.

On November 2002 creates the Center of Clinical & Surgical Ophthalmology where practices and offers his medical services till now.

He continues his collaboration with the University Eye Clinic of Modena. 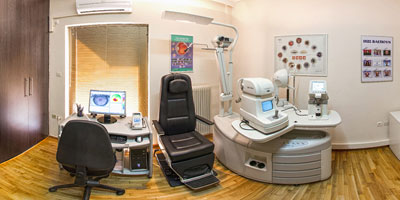 A complete ophthalmological check up is performed at PRISMA Standard Ophthalmology Clinic.